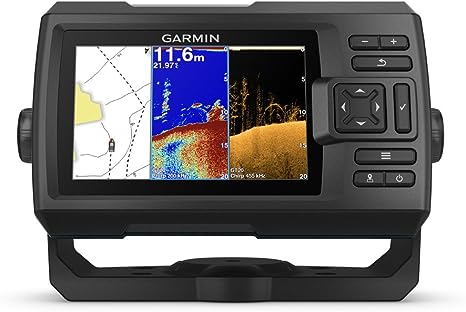 Some might call it the flagship of the Garmin fishfinder line of products. The Garmin Striker Plus isn’t the first fish finder released by the company, but in the opinion of many, it was the best of its kind when it first hit the market and its fan base remains sizeable today.

Garmin Striker Plus 5cv with Transducer
$319.99
Shop on Amazon Shop on Bluewater

This Garmin Striker Plus 5cv review may mention what it doesn’t have in comparison to the competition, but it will focus on the quality performance it does possess.

The Garmin Striker Plus 5cv has a five-inch diagonal screen packed into a one-pound 7.4×4.5×2.1 inch (5.33 cm) footprint. A water resistance rating of IPX7 means you can drop this fish finder into three feet of water for 30 minutes and retrieve it damage-free. The splash off the bow of your boat at high speed, choppy water, rain, sleet, or snow doesn’t affect the performance.

A transmitting power of 500 watts sends enough energy into the transducer to bounce back clear images from the twin sonar output.

The supported frequencies work in the traditional 50/77/200 kHz band and via Clear Vu frequencies of 260/455/800 in the mid to high range CHIRP sonar.

A built-in water temperature logs and adjoining graph with a bottom lock feature that returns images from the bottom of the water back up enhance viewing.

On the viewing side of the fish finder, it offers split-screen imaging, and Garmin’s trademark Ultrascroll technology that spots and displays fish images at higher boating speeds.

An adjustable depth capability line shows the exact location of underwater objects in relation to a set frame of depth reference in the water.

A-Scope, another Garmin technology, displays real-time images of fish as they pass through the transducer beam.

The Garmin Striker Plus 5cv comes with a temperature sensor as well.

Does Garmin striker plus 5cv have maps?

The Garmin Striker Plus 5cv fish finders come with Quickdraw Contours software installed for creating your own underwater maps with contours of 12 inches (0.3 m). It can mark waypoints in relation to the built-in GPS for future map references when you’re out on the same body of water again.

The Benefits of the Garmin Striker Plus 5cv

This is an established technology used by tens of thousands of anglers with excellent results. It is a durable fish finder that can withstand the extreme weather found on northern lakes, where the air temperature can drop below freezing in just a few minutes. It also works well in tropical ocean water with an air temperature over 100 degrees and water above 85.

CHIRP sonar and Clear Vu technology offer high-quality imaging to extreme depths. This fish finder can pull up images of bottom structure, submerged obstacles, and fish to a depth capability of 2,300 feet (701.04 m) in freshwater. You’re not apt to spot a lot of fish or have enough line to reach them if you did at almost half a mile below the surface. Sometimes knowing the underlying structure, even a very deep structure, is an advantage for the skilled angler in locating fish.

The Autogain technology, split-screen zoom viewing, and Ultrascroll technology are all selling points for higher-end Garmin fish finders. The Garmin Striker Plus 5cv is one of the first to successfully integrate all these into one easy-to-use package, and at a very reasonable price.

The 500-watt transmitting power pushes the dual-frequency CHIRP sonar through clear, or turbid water with ease. The ability to tie in the built-in GPS with Quickdraw Contour software and create your own maps is one of the most popular features of the fish finder. Storing up to 5,000 waypoints is a plus as well.

Waypoints can be favorite fishing spots, or locations of boat ramps, marinas, or nearby highways. If you’re fishing lakes near residential areas that have privately owned sections it is a boon in keeping you off property you don’t have access to and avoiding conflicts.

What transducer comes with Garmin 5cv?

The Garmin Striker 5cv comes with a GT20-TM transducer. 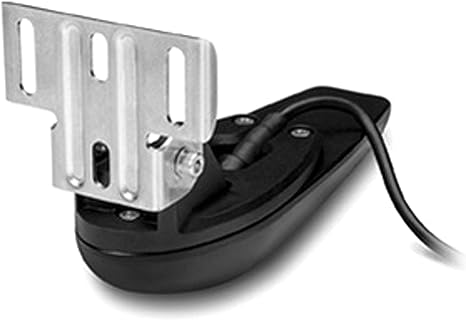 This 20 ft transducer cable with built-in fast response temperature sensor has a power rating of 500 W; a depth of 1,900 ft (traditional) and 750 ft (DownVü).

This transom mount transducer comes equipped with DownVu, CHIRP sonar, and traditional sonar. Also included with the Garmin Striker 5cv is a trolling motor mount for the transducer.

Does Garmin striker plus 5cv have Wi-Fi?

There is no chart reader on this fish finder, and with no way to add any additional software. Since there is no Wi-Fi,  Blue Tooth, or digital signal interface of any kind, you’re stuck with what you produce on your own.

There is no SD Card reader. That means you can’t download any new software, second-party maps, or upgrade the fish finder beyond its original configuration.

An additional issue comes from problems some users reported with mounting the fish finder to a trolling motor. It can be used by attaching it directly onto a trolling motor as many anglers prefer, but some models of trolling motors produce interference that can affect the performance of the Garmin Striker Plus 5cv.

Why Choose the Garmin Striker Plus 5c fish finder?

At the end of the decision on which fishfinder to purchase you’re faced with a simple proposition. Do I wait for more advanced technology, or does this fish finder have all the features I’m looking for, and at a very moderate price?

The Striker Plus 5cv is a venerable, well-respected fish finder produced by the world leader in fish finding technology.

It will find fish, help you avoid obstacles, and allow you to mark important points on any lake or offshore area you fish.

It doesn’t offer the downloadable maps that many anglers look for. If you’re prone to get lost, or infrequent areas of heavy fog, it won’t mark your path home on the viewing screen as many more modern fish finders can do.

We live in a world where newer and better are constant themes.

As outdoorsmen, you’ve probably learned that all those features many customers look for in a new car are not necessary for a truck or SUV that gets you to your fishing and hunting destinations.

The Garmin Striker Plus 5cv is like that reliable old truck that never gets stuck. The one that will always get you home no matter the weather or road conditions. It may not look as bright and shiny as the new models on the lot but is as familiar as an old pair of boots.

The Striker Plus 5cv is a great fish finder that works on kayaks, canoes, larger charter boats, and just about any other watercraft. The one-pound size and fully implemented CHIRP sonar technology make your fishing experience better during any fishing trip.

Check out the Garmin Striker 5cv fish finder at one of the following retailers:

Garmin Striker Plus 5cv with Transducer
$319.99
Shop on Amazon Shop on Bluewater

For more guidance on choosing a fish finder, check out these pages below: 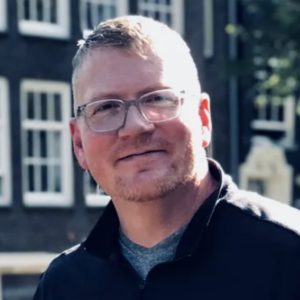